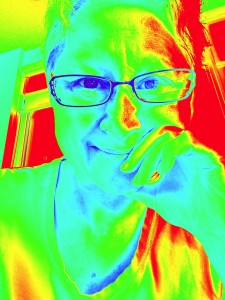 I was so excited!  I hadn’t seen my first real love since my parent’s divorce, and today was the day. My heart was just bursting.  I fidgeted in the car all the way up to his house; I just couldn’t wait to see him smile at me; hug me.  I wanted to know everything he’d been doing over the last six years, and I wanted him all to myself.

As we drove up to the house, I felt a little disappointment seeing several other cars in the driveway.  I’d hoped the house wasn’t so full of other people that we didn’t get a chance to take a long walk, or have that long, desperately wanted conversation.

I knocked, and someone I vaguely remembered opened the door.  I could hear raucous laughter pouring out of the back room, and felt immediately withdrawn.  As an introvert, I don’t do well with people I don’t know or noisy environments. But it all just melted away when I saw him, and I thought back to a time that didn’t seem possible that I’d lived; rather a different life, space, and time altogether, almost a dream.

Seeing his face, I was immediately transported to my childhood; running down the chevroned concrete driveway, ponytail bobbing; him running beside me.  I always beat him.  The leaps off the garage roof, the every other Saturday morning hockey games, the beautiful white boxer named Snow that waited for us as we came home; the other Saturdays at my grandmother’s house as we ran around and were told countless times to “settle down,” finally doing so with a game of Parcheesi or playing with our Etch-A-Sketches.

We never had a cross word between; ever! We never had a fight like I’ve heard tell from other friends who have siblings – especially brothers.  He never picked on me, in fact, (even though I could always handle myself), he would never let anyone else pick on me either.  He would have defended me in the face of giants or ogres, dragons or armies.

I smiled at him, as he looked up, and then it happened, the second worst thing I could have imagined.  He ignored me.  He was with some other friends, playing his guitar and laughing. Surely, he didn’t see me.  I came closer and said hi.  He said a cursory, hi, then did the worst thing I could have imagined, he got off the couch, motioned to his friends to follow him outside, and left me standing alone in the middle of the room.

To say, I was crushed, would be like saying that the atom bomb had done “a little” damage. My first love had dumped me! He’d cast me off, brushed me aside; almost as if he’d never known me.

It had nothing to do with age, as there were only three weeks between us, me being born in August, he in September.  I simply just wasn’t important to him anymore.  That’s when I knew our intimate relationship was over.  Perhaps it had been a dream, one that I wish had never ended.

We saw each other only a few times over the next decade – once when his sister Christine was killed in a car accident, the other his father’s death, and finally his mom’s funeral.  Then there was the day he called begging me to visit my father who was dying.  If it had been anyone else who’d asked, I would have said no, but it was “him” asking, so I went.

About four years ago, I saw him once more as he came into the city for a doctor’s appointment for his son, and stopped by the apartment.  When he left, I thought how odd it is that people can be so very close to each other, and then it’s just . . . gone.

We’d shared nothing of our lives, past the age of 14.  He married a lovely woman from New Brunswick and had a brilliant son.  I got married – twice, but neither had been invited or gone to each others weddings; there were no congratulatory cards or e-mails on the birth of our children; no sharing of any kind.

I never realized how much that shunning still hurt me until I saw him this month and realized how very much I still loved him; how deeply he is embedded in my heart. He is my flesh and blood.

He took me on a ride around his thirty acres of mainly uncleared brush and pine, and I could feel the pride as he shared it all with me, along with stories of bear and deer that come up to the porch. We laughed, threw barbs, hugged and talked.  It was a truly wonderful day!

We are cousins, family; attached by some invisible thread of generational time that can NEVER be broken.  We may live separate lives – him always and forever a country boy; I forever and always a city girl, but in my heart, I will always carry the memory of “little” Danny and Kimmy, running down that concrete driveway some Saturday afternoon, 1960 something.

Danny, you were, and always will be, my first love.